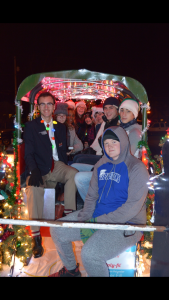 As a state officer I have had the privilege of meeting so many outstanding members of
Oklahoma BPA, who are filled with talent and passion. I am continuously amazed by the
incredible work being done by local chapters all across our state. Today I have the great honor
and opportunity to shine a light on my very own local chapter, Meridian Technology Center BPA.
This chapter, along with its members, have become like family. They have transformed my life
for the better, and they have helped me to be where I am today.

Recently, we decided that we were going to create a BPA float for the Stillwater Christmas
Parade. We decided that we weren’t just going to create a BPA Christmas parade float, we were
going to create THE BPA Christmas parade float. Soon after this decision, we scheduled special
BPA meetings where the only item of business was planning the creation of an amazing float.
We recruited the help of our entire chapter, we even made a commercial about our float. Next
we scheduled two float workdays, the participation that we received from our members was
fantastic! In such a short amount of time, we all came together, had a great time, and through
the incredible dedication and leadership of our chapter Presidents Jaycee Everett and Evalyn
Harper we succeeded in creating something that was truly outstanding! The very next day we
entered our float into the parade, and unveiled our work to the community of Stillwater. 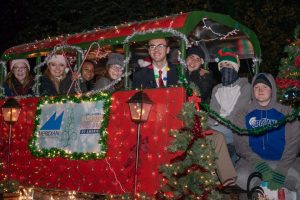 Riding down the streets, alongside my fellow members on top of the BPA float was an absolutely incredible experience. As we drove past the crowds we were greeted by enthusiastic cheers from community members who were once members of BPA themselves. They waved and wished us a Merry Christmas.The woman who was announcing floats as they passed by
the judges stand, announced that she was a former member of BPA. The smiles that we were able to put on the faces of those young and old was truly heartwarming. I believe that the awareness that we raised for BPA will have lasting effects on the Stillwater community, but
that’s not even the best part. Shortly after the conclusion of the parade, we were informed that
our float placed 1st in the Community float competition. We were absolutely ecstatic. It was an
honor for us to win this competition on behalf of Meridian Technology Center and Oklahoma
Business Professionals of America. 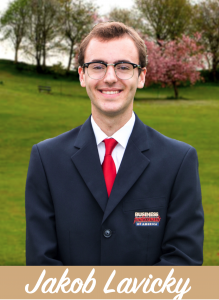 So… if you or your chapter have the desire to go out into your community and do something
amazing for BPA, I say absolutely without a doubt go out and do it! There is no goal that is too
big for you to accomplish. Through teamwork, unity and dedication, you can do anything. Thank
you for allowing me to share with you the success of my chapter. I look forward to seeing the
continued success of yours!

On behalf of Meridian Technology Center’s BPA Chapter and the Oklahoma BPA State Officer
Team, we wish you a very Merry Christmas and a fantastic 2019!